All right, dammit, I’m pulling the trigger on a new blog feature.

For years now I have been experiencing episodes of synchronicity (or at least high coincidence) on a near daily basis.  Often these revolve around the podcasts I listen to, and how certain topics will crop up on completely different shows, recorded by completely different people, weeks apart, often geographically distant from one another, yet get listened to by me within an hour of one another on the same day.  I’ve been meaning to start writing these down, because some of them have been pretty astounding to me.  I make no claim to knowing or even speculating what any of it means, though the déjà vu side effect of something changing in the Matrix does make a satisfying form of sense to me.  Instead, I will now set about to chronicle them when they happen so as to see if there is an overall larger pattern even if that pattern would suggest that I am nuts.  Or not. 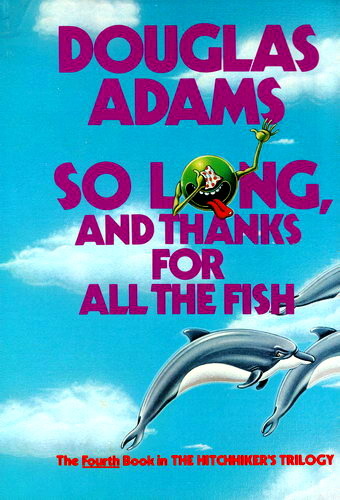 Some background:  While working on finding some appropriate material to read for the fastly impending creative writing class I will be teaching at a local federal prison, I was perusing Hitchhiker’s Guide to the Galaxy author Douglas Adams’ posthumously released collection of writing The Salmon of Doubt.  In it, there is a brief essay describing a time in 1976 when Adams was waiting for a train and purchased a newspaper, a cup of coffee and a packet of cookies and sat down to enjoy them and do the crossword.  His items were laid out on the table before him.  Before he could open his cookies, though, a stranger across the table from him picked them up, opened them, ate one and replaced the packet on the table.  Adams didn’t know how to respond to this, so he picked up the cookies, took one of his own, ate it and returned the packet to the table.  He said they went back and forth like this through the entire pack of 8 cookies, each taking one after the other.  Only after the cookies were gone and the man had departed did Adams pick up his newspaper only to discover his original pack of cookies had been beneath it the whole time.  It’s a fantastic story, but it gets even better, for Adams used that very story as an anecdote in his 4th book in the Hitchhiker’s series, So Long, and Thanks for All the Fish.  In the book, his primary character Arthur Dent tells the story to his new girlfriend, Fenchurch.  My goal, having located the nonfiction version in the Salmon of Doubt, was to then go and locate it in So Long… in order to see the differences between the two in case that might be of any use to my students.  Before I could find one of my three copies of that book, though, I had to go take care of some bathroom business.

Whilst business was being taken care of, I perused my copy of Doctor Who Magazine, issue #475, in which there is an in-depth examination of the classic Tom Baker serial The Talons of Weng Chiang in their monthly The Fact of Fiction section.  The section goes back and forth between describing events in the story and providing DVD-style commentary and explanation of those events.  In the section about Part Two of the story, the article mentions that the Doctor, speaking to Professor Litefoot, makes a joke that his companion, Leela, is a savage who was found floating in a hatbox as an infant.  “A hatbox?” Litefoot responds.  The article’s commentary points out that this bit of dialog parallels a scene in Oscar Wilde’s play The Importance of Being Earnest in which “Ernest” explains to his potential mother-in-law how he had been found, as an infant, in a hand-bag in the cloakroom at Victoria Station.  “A hand-bag?” she then exclaims in response.

Cut to ten minutes later.  I have returned to my office, found my copy of So Long, and Thanks for All the Fish, am looking for the story of the cookies, as told by Arthur, but in my searching I come upon another Arthur/Fenchurch scene on page 56.  (Douglas Adams typeset the Hitchhiker’s books himself and most editions will have this occur on page 56.)  In it, Fenchurch is starting to tel Arthur about her past and Arthur says he has a question for her.  She senses what that question will be in advance and offers to say it with him.

“…in the Left Luggage office,” they said together.

“…at Fenchurch Street Station,” they finished.

“I was conceived there.”

Clearly the Importance of Being Earnest is what they were both referencing, a fact I never realized was the case during any of the previous times I’d read the book because I had not read the play.  It had occurred to me to wonder why Arthur anticipated the circumstances enough to form the question, but I figured, rightly so it seems, that this was an English joke or reference that I just didn’t get.  That’s all fine and good, but the fact that this synchronous bit of literature fell into my lap minutes after reading the origin of the reference in Doctor Who Magazine is very odd and disconcerting to me, though mostly in a positive way.  I like to call such off-putting and hard to explain encounters as “bad craziness”–not meaning that I think I am crazy in a bad way, but that the situation is crazy and it’s bad that I can’t explain it.  Once I found the section of the book I was actually looking for, there was another allusion to her conception in the train station, which might have caused me to go back and recheck the previous story just to make sure I remembered things right.  Again, bad craziness.

As we lay in bed, about to go to sleep, I told the above story of bad craziness to my wife.  She, while trying not to smirk, said she thought it was a plot against me.  She said, furthermore, that she thought there was likely a conspiracy at play.  This light ridicule is, of course, a typical reaction of people when faced with those who’ve just felt their world’s kilter jarred.  And while I knew she was mostly kidding, it still annoyed the bejeezus out of me.

“I’m making no such claims,” I said.  “It’s just very odd that the reference happened so soon after I’d read its explanation.”

Things to do:  Reread So Long, and Thanks for All the Fish.  It’s been many many years since I last did.

Things to do: Read the Importance of Being Earnest.  It’s high time I did. Might get a few more jokes.

A CONSTERNATION OF MONSTERS IS AVAILABLE IN PRINT, EBOOK AND AUDIO BOOK FORMATS

Check out my TEDx Talk